Note: There was no letters page for Entertainment Weekly this week. The devious swine!

You got it right by choosing Matt Damon as the Sexiest man Alive. But the sexiest things about Matt aren't his killer smile and gorgeous blue eyes. It's his sense of humor and his devotion to his family and friends that makes Matt so sexy. Thanks for the best SMA issue ever.
Melanie Davies
Freeport, Maine 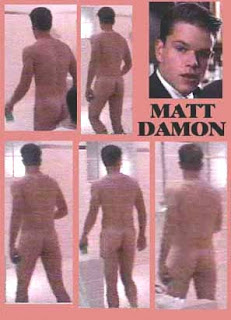 Matt Damon: Finest Actor of His Generation
Melanie,
Right - those are the qualities that make him sexy. That must be why you hear so many funny, loyal, morbidly obese garbage men referred to as "The Sexiest Men Alive". Come on, this is People magazine - you don't have to try to impress anybody by pretending to possess depth. We worship the surface here, baby! That's why they don't put out a "Wittiest Man Alive" issue or a "Most Likely To Make You The Perfect Mix CD Man Alive" issue. Or maybe they do. How the hell would I know? You're the jive turkey fool who reads this rag. Still, I won't hold that against you. Or will I?

Yes, I will,
John

Perfect pick for SMA! Matt Damon could not be more adorable. He is witty, smart, genuine and hot! His humility only adds to his charm.
Maren Zielony-Schultz
Portland, Ore.

Maren,
I must strenuously disagree. Matt could indeed be more adorable if he got a fucking haircut so he looked like a little boy instead of a little girl. Just ask Kathie Rementer of Yardville, N.J. She's an expert in this particular field. I bet she's even got graphs showing the relationship between adorableness and hair length that she'd be happy to send you as a PowerPoint presentation. It is always best to defer to her Buddha-like wisdom in these matters. So, if it's all the same to you, I'll take your opinion for what it's worth: a heaving lump of crap.

The walrus was Paul,
John

Every week when my husband goes grocery shopping, he brings home PEOPLE magazine for me. This week he was laughing when he gave it to me. "Matt Damon?" he said. "Is this a joke?" We are both huge fans of Mr. Damon's. He's a phenomenal actor. But Sexiest Man Alive? Matt isn't being humble in denying the title; he's just being realistic.
Dr. and Mrs. Lee Hein
Seattle, Wash.

Dear Mrs. Hein,
Three things:
First, I don't believe your husband is a doctor. Oh, he may have his doctorate, but so what? I've spent years of my life stealing information from reliable sources and passing it off as my own in papers I wrote, too (I called it "school" - and, later, "a job"). But I'll bet my Batman Underoos he's no physician. I make this judgment based solely on the fact that you claim he buys a People magazine at the supermarket every week. Everyone knows real doctors get, like, 90% off the cover price for their subscriptions. I myself attest this is immutable truth, because I always pretend to be a "doctor", too, and reap the endless benefits every day of my life (free popsicle sticks!). Anyway, your preoccupation with name-dropping and social standing is completely out of place. This is not the Victorian era, in case that fact has slipped your mind. So your pathetic stab at pretension is doubly misguided.

Second, speaking of this not being the Victorian era, do you actually refer to yourself exclusively in reference to your husband? What kind of crazy Stepford Wife shit is that? You didn't even use your own first name, for Chrissake! Do you really value yourself so little that your entire identity is based on the accomplishments of other people? Wait, you read People every week - of course you do!

There is no third point. I lied. Work on your gullibility.

Stop! In The Name Of Love,
John


You've got to be kidding! Matt Damon? Don't get me wrong, he's adorable and all, and I had a crush on him back in 1997 when he did Good Will Hunting. He's cute like a puppy, or someone's kid brother. But Sexiest Man Alive? No way!
Jennifer Kennimer via e-mail

Jennifer,
Ooh, you're so cool - you had a crush on Matt Damon way back in '97, before he sold out and everybody knew who he was! I bet you saw U2 at The Paradise in Boston in 1980, too, huh? And now all the rest of us plebes are years behind the curve, just like always. Please, write back soon and tell me who it's acceptable to have a crush on now, so I don't look like a complete moron at the next shindig I attend with all my 15-year-old hipster girl friends! Those things are difficult enough as it is. I mean, what with the restraining order and all.

Thanking you in advance,
John

I just plain laughed out loud at the comments of Matt, Ben and George. This is what makes them so very sexy - they don't take themselves too seriously. And the shot of Jimmy Kimmel in his Barbie pink bedroom is priceless.
Cindy Schiller
Waukesha, Wis.

Here we go again with the bullshit list of What Makes People Sexy. You know who else doesn't take themselves too seriously? Smack addicts and the mentally impaired. How could they? They're too busy being high and/or stupid! And I can tell from your moralistic tone that you're not attracted to either of these groups. So save your platitudes for your Oprah Book Club meetings. You know damn well they're sexy for purely aesthetic reasons. Nobody ever masturbated to The Quality Of Being Carefree.

Oh, and you're wrong about the Jimmy Kimmel thing, too. As most individuals of breeding and refinement are aware, there is a price to everything Kimmel-related, and that price is usually $2.47 (Canadian).

Nobody' gonna break-a my stride,
John

Year after year you feature George Clooney in the Sexiest Man Alive issue. Are you all forgetting his father, Nick Clooney, still lives? Nick has always been way hotter than George.

Sandra,
No, I'm a frayed knot.

p.s. If you're going to try to tell dumb jokes, it's usually good form to supply the punchline yourself.

Where the hell is Bill?,
John

I recently lost my father to a heart attack, and it was very hard on my family. The love and support of his family and friends will get Kanye through this trying time.
Angie Kowal
California City, Calf.

Angie,
And let's not forget his piles of cash and mountains of drugs and hookers!

We had joy, we had fun,
John

I have never seen anything more beautiful than your photo of Robin Roberts with her bald head. Her positive outlook on life makes her an inspiration for those who find themselves battling breast cancer. Thanks to Robin for showing us courage and strength.
Amanda Juarez
Tacoma, Wash.

Amanda,
Seriously? You've never seen anything more beautiful than that? The only way I can see that that's possible is if you went blind from staring at the sun and then fell and suffered head trauma that resulted in amnesia so you forgot what seeing was like, but you finally got an operation to restore your sight and it was a success except it only lasted long enough for you to see that picture before going blind again. Which seems highly unlikely. Not that I'm saying she's fugly or anything, but get a grip. If you're that easily impressed, pull my finger and you'll get the most beautiful olfactory experience of your life.

All aboard for Funtime,
John
Posted by John at 10:43 PM

Dude, I was in my early 23 then, plenty young enough to still have crushes. Also, I was 6 in 1980. You sure spend a lot of time and energy doing this this, don't you? Life a little mundane?

p.s. All that aside, your blog is pretty damn funny.

p.s.s. Yes, I googled my name to find this, which I agree is pretty lame. So no need to make fun of me twice.