So, who's got Olympic Fever? If you do, keep it to yourself. I couldn't give a shit less. As I've said many times, I'm just not that stereotypically "manly". The only thing worse than watching sports, in my opinion, is listening to some asshole talk about sports (speaking of which, what the hell do sports commentators major in, anyway - Pointing Out The Painfully Obvious? Finding 100 Different Ways To Say The Same Damn Thing Without Stuttering Like A Fu-Schnickens Song?). I'm similarly bored to puking by all things automobile-related, nor am I the least bit handy with tools. Also, I have a vagina.

But my point is, the Olympics suck. I ask you, what rational being cares which freakishly-built little puppet-woman wins a gold in gymnastics? I mean, sure, I stayed up until midnight watching the shit, but so what? It's like pork rinds - I know it's awful for me, but I can't stop myself. Who says Freud was wrong about that Thanatos stuff?

But my real point is: you know what sucks even more than the Olympics? The commercials they show during the Olympics. If Dante was alive today, surely there would be a whole extra circle of Hell where souls were tormented by being forced to watch this crap for all eternity. The most annoying so far is the one (I don't remember if it's for Nike or not - once again, good job at getting people to remember the product, geniuses) with the song that just repeats the line "I got soul but I'm not a soldier" (which is apparently by The Killers - I had to look it up, preferring not to listen to shitty poseur bands myself). How the hell you can get four (or whatever) members of a group to agree this constitutes a decent lyric is beyond my powers of comprehension. It's like saying "I got arms but I'm not an arms dealer" - not only is it not clever, it's a fucking non sequitur, ya moe-rons! Which brings me to my real real point:

Advertising is made by and for stupid asshole dickhead poop-butt scumbags, with absolutely no exceptions. As I've also said many times, whenever I hear somebody utter the words "I love that commercial!", I automatically check them off the list of people I want to know. And it's only gotten worse in the last 10 years or so. Back when I was a kid, commercials were obviously crap, most of them still using antiquated 1950s advertising methods. There were no popular songs used, with the exception of dumb studio hacks singing "Talkin' 'bout my Ken-L-Ration" or whatever. But nowadays you've got people who own the entire Criterion Collection on DVD and who grew up listening to "alternative" music working in advertising, and they either want to convince themselves they're still cool or they think they're helping the cause by using Feelies and Pogues songs in car ads. Well, you're not helping - you're making things worse. I have no doubt that these songs actually affected you, but now you're forcing them to affect me in ways completely antithetical to the ways they affected me originally, and for that I invite you to suckle Le Pepe. Try to understand: you may have been hip in high school or college, but you've long since stopped being hip by virtue of the fact that you work in advertising. You're now part of the problem, and no matter how "artistic" or "ironic" you make your ads, you're still promoting utter and profound evil every day you walk into the office. I know a few people who work or have worked in advertising, and I'm not saying you're all definitively soulless asses. But you sure as hell hang out in the same circles as those who are. But hey, I still bite my nails down to nubs, so it's not like I'm without my faults.

In any event, on to the letters!

Thanks for writing about "Dr. Horrible's Sing-Along Blog" ("The Doctor is In"). But you spoiled one of the best jokes. The funny part of having Bad Horse as the Evil League of Evil leader was that you didn't know he was a horse until Act 3!
Terry Drosdak
Silver Springs, Md.

Terry,
Well, way to spoil it a second time, jackass. Did you ever think maybe people didn't read the article in the first place just to avoid such revelations, only to have their dreams shattered a couple weeks later by reading it on what is supposed to be the fairly innocuous and mildly retarded letters page? Apparently you didn't. As my dad used to say to me immediately before he beat me senseless, "That's the problem - you didn't think". Which was a bit unfair, seeing as how I was only 3 months old and couldn't understand a damned word he was saying. Still, I learned a valuable life lesson from his incomprehensible gibberish - a lesson you somehow managed to avoid into adulthood. Maybe you were raised by wild boars or something - I don't want to know your whole woeful life story. I have not the time for such folderol, sirrah! The fact remains, though, that you really humped the donkey by opening your fat, gaping maw without some kind of spoiler alert warning. I only hope the billions of fans of "Dr. Horrible's Sing-Along Blog" are proper Christians and don't ostracize you like that one community did to that poor, misunderstood wretch who made up the fake MySpace account to taunt that depressed girl. Sadly, I have no control over such things, so you probably want to check your car for bombs or whatever every morning, lest someone pull a Michael Clayton on you. Wait, you did see Michael Clayton, right? Damn, now you've got me falling into your inconsiderate trap. Oh, you're the devil, all right. The devil of my heart.

Anyway, I've never seen the show, but I imagine the fact that the character was named "Bad Horse" might have tipped me off to its species. But then, I'm always taking things so literally.

They call me Yuck Mouth - 'cause I don't brush!,
John

This Pop of King was especially endearing. In no other magazine can you read about the "Bard of Horror" experiencing pure giddiness over eating Junior Mints on a toothpick.
Alexis Miller
Pittsburgh 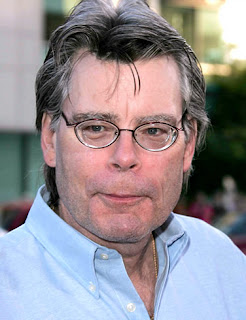 Just so you're clear, this makes about as much sense to me as your letter.

This is your correspondent, running out of tape, gunfire's increasing, looting, burning, rape,
John
Posted by John at 3:31 PM

I hear ya on the Pogues selling cars. The real irony is that whatever shill picked Sunnyside of the Street had no clue what the lyrics were.

Kudos for the Wire reference, too.

Hey you Lego my Eggo

Everytime I hear that I GOT SOUL BUT I'M NOT A SOLDIER song I want to puke my guts out. I am fully with you on commercials and just have to thank you for being as pissed off about them as I am.

If you like that Nike commercial, you would really love the movie Southland Tales, which features a complete song and dancer number set to that song - all performed by Justin Timberlake!

Only wish I was joking.

I love the Fu-Schnickens reference.

Naya Orkut is your place to share videos, audio, photos, and stories. Join now and get your own profile page, blog and unlimited media uploads!

So true about advertising, and about the annoyingness of people who love commercials, who tell you the plots of commercials, and who seek out commercials to watch on youtube. And worst of all, those who pay to go to those programs of 'the world's best commercials' that occasionally happen at the local rep film house. Can you possibly become more of a Tool than paying to see commercials.

Whenever advertising or marketing comes up, one must reference bill hicks: http://youtube.com/watch?v=gDW_Hj2K0wo

what the fuck monkey boy, get off your ass and entertain me!

I have found your Blog through a search at Google. Your website is quite interesting
and knowledgeful. We do have a similar website and would like to offer you to change blog links
so both of our website visitors can get benefit of related resources.

Please reply me if you are interested so we can discuss further details.

Thank goodness the author of this pathetically unfunny blog had the sense to abandon it.