Sounds Great When You're Dead

All right, let the bitching (re-)commence!

Good news: After taking a month off, I've got a huge backlog of letters, and I'm not afraid to use them.

Gooder news: despite my earlier post, my health is quite good; in fact, except for a very brief period, I've felt fine physically - it was more that I was worried about a possible problem than any actual symptoms fucking with me. But it looks like, as is the case with most things in life, all that worrying was pointless. But hey, I'm in a rush - I'm pretty much out the do' to see one of my fave-rave comedians, so here's a quick taster for the faithful:

I get it: "Sex and the City" changed the way we all look at women in their 30s; Sarah Jessica parker is the master when it comes to changing a mini-dress into a work of art; and cosmos are delicious. But 63 pages? Enough already!
Stephen Riordan
St. Petersburg, Fla.

Stephen,
As even a tree stump could probably guess, I'm in agreement with you on that last part. As to your other points:
1) I suppose it might have changed the way I looked at women in their 30s - if I believed sitcom characters resembled anything approaching reality; or if I hadn't already met plenty of women in their 30s who weren't shallow, oversexed retards; or if I had the kind of pea-brain that could reasonably extrapolate from "4 rich, white Manhattanites" to "all women in their 30s"; or if I lived on a steady diet of paint thinner and thalidomide-soaked plums; or if I'd ever been able to make it through an entire episode in the first place;
2) I must have missed Ms. Parker's exhibit at the Cooper-Hewitt Museum, because the only thing I've ever noticed her doing with a mini-dress was wearing it, which, unless you're using it as a line to try to get laid, doesn't even meet the minimum requirements for transforming an object into art; and
3) Cosmos taste like possum vomit.

But thanks for writing anyway.

Heartbeat, it's a love beat,
John 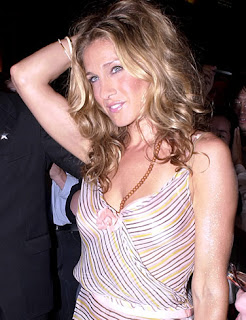 "When you consider the epic sweep of history and
the unimaginable vastness of the universe,
perhaps this pose is fairly meaningless after all."

The photos of Carrie's tutu and seaform gown were a godsend. For years, I have been scouring the internet for a good, clear photo of that dress. Now I finally have it!
Pat Muniosguren
San Mateo, Calif.

Pat,
Truly, your life is the stuff of Greek tragedy.

Romeo was restless, he was ready to kill,
John
Posted by John at 3:40 PM

I missed you. You make me laugh.

I wait a month, and that's all you have banana boy?