As God Is My Witness, I Thought Turkeys Could Fly

Well, it's Thursday, so here's your update. You know, I thought I'd be much happier confining myself to one post a week - it's an easily attainable goal, and should theoretically give me plenty of time to go through the letters and think up kick-ass responses. But it turns out I still wait until the end of the day before even bothering to read the letters pages and then make it up as I go along. You think this is how John Grisham works? I'd bet a billion dollars it is.

I absolutely love Ashlee Simpson - she is the kind of woman I want to be. I am so happy that she has found Pete Wentz, who is so perfect for her. She deserves the world, and all I wish for her and Pete is happiness.
Maggie Ascher
Seattle, Wash. 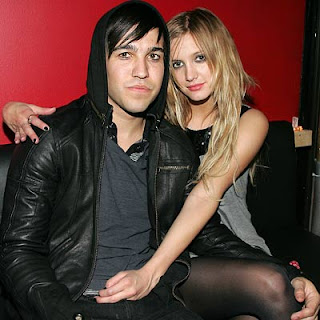 Photographic proof that the fabled race of
super-raccoons Plato spoke of actually exists!
Mags,
She's the kind of woman you want to be? Come on, I don't think you're giving yourself enough credit. I have no doubt you possess all the characteristics necessary to be a talentless poseur right now! All you need to do for a complete Single White Female-type identity usurpation is find yourself some aspiring "musician" who wants to sound like Blink-182 except not so edgy, and you're set. Try your local mall - they're full of exactly this type (especially working behind the counter at Hot Topic).

I have a question, though: when you say you're "so happy for her", are you really indulging in that catty "I'm so jealous of that stupid bitch but I'm going to go overboard with my fake enthusiasm and hope she gets eaten by a fucking rabid badger" behavior I've seen so many women (and Southerners as a group) exhibit when others achieve some level of personal or professional success, or are you being genuine? Because, frankly, either way I think you're nutty as a squirrel. But, to be fair, I pretty much think that about anybody who'd say Ashlee Simpson deserves the world. Unless by "the world" you mean "swift obsolescence followed by decades of dreary regret". I admit, I'm not really up on all you Gen-Yers' slang. "Put on your bra and get out!" is pretty much all the communication I've had with any of you, to be honest. Oh, the shame of it all.

Seeing other people - at least that's what we say we are doing,
John

I'd love to be the bookie taking bets on how long Ashlee Simpson and Pete Wentz's marriage will last. I give it less than a year after their child is born.
Eileen Schnatter
Flanders, N.J.

Eileen,
I don't know what kind of ultra-pussy bookies you hang out with, but no self-respecting specimen I've met would even know these two idiots exist, much less take bets on their marriage. I realize your brain's probably a bit addled from the lingering excitement of the Sex & The City premiere, but in real life burly, hairy, balding, cigar-chomping palookas don't have hearts of gold or well-hidden tender sides. There is, in fact - just like Sex & The City - nothing below the surface. Not every asshole is a wounded bird who just needs you to nurse him tenderly back to wholeness, Eileen. Most of them are simply, well, assholes. I'm only trying to save you years of heartache, you realize. And maybe help some poor teenage girl who's infatuated with her high school's version of the "troubled" motorcycle rebel who might be reading this. Don't do it, girlfriend! He'll only hurt you in the end. On the other hand, he most likely will bring you to screaming multiple orgasms, so it's a bit of a trade-off. Whew. I wonder if Spike's going to be at the 20-year reunion?

Oh - I do agree with you about the time-frame, though, Eileen.

"Mad men" takes us back to a time that was beautiful on the outside - but not on the inside.
Mary Brick
Centreville, Pa.

Mary,
So you're saying it takes us back to basically every single period in the history of humankind, then? Oh, wait - I always forget: The '70s were actually ugly on the inside and the outside. So I guess that narrows it down. Good work, old bean!

The KKK took my baby away,
John

As a fan of Lloyd Kaufman's since "The Toxic Avenger", I'm giving you props for showing some love to the Troma film "Poultrygeist: Night of the Chicken Dead" (Movies, #994). It's a shame my local multiplexes couldn't find room for this undeniably original movie. That's pretty clucked-up.
Scott Milletics
Camp Hill, Pa.

Scott,
For the love of all that is holy, please shut the fuck up.

I can't find you, stay where you are,
John

The cover of your Summer Movie Preview (#994) read "All The Hottest Albums & Tours", so I excitedly thumbed through the issue. But I found out that apparently country music barely exists.
Calvin Fleck
Red Deer, Alberta

Calvin,
Thanks for passing that along - I, too, am delighted by this news!

Wasn't it you and I who made promises of eternity?,
John

Unlike Chris Nashawaty, I WAS one of those kids who grew up reading comic books with a flashlight in bed. To people like me, the dominance of superheroes in theaters is a dream come true. Right now is our time - just deal with it.
Dave Rousseau
Spokane, Wash.

Dave,
Oh, I'll deal with it, all right. But this isn't about me. Holy fucking shit, Batman - it's your time! Whatever will you do with it? Excel in the business world and date a never-ending stream of gorgeous models, I'd guess, based on my experience dealing with superhero-comic fans. Or, oh! - or maybe you can all get together after an advance screening of the new shitty-looking-CGI Hulk movie and perfect your robot ninja army! Then all those girls who never noticed you in high school will see how wrong they were to be so shallow and decide to birth you a Justice League worth of babies! Having thus established your dominance, you'll be able to convince the populace that "Weird Al" Yankovic and Steve Wozniak would be the perfect ticket for the Democratic nomination in 2012, and your kind will finally rule the earth as you've always secretly known you should! You'll advise them to change the National Anthem to the Imperial Attack theme from Star Wars, and they'll ram that shit through Congress (which will consist of Stan Lee, Frank Frazetta, the corpse of Jack Kirby and their assorted lackeys)! The world will be your oyster! Or at least some non-shellfish type of food that you're not deathly allergic to.

Get teenage kicks right through the night,
John
Posted by John at 8:14 PM

You're a funny man Dr Jones

Belle and Sebastian, Sleater Kinney, Ramones and Undertones. I think that's my best yet. I could probably google the rest but I'm too lazy for that.`

You got it. The others are "Elenore" by The Turtles and "Promises of Eternity" by The Magnetic Fields.

I find that humor works best when it's based in truth.

You are one crazy MF. Don't ever change.

i guess it is true any idiot can write stuff on the internet. john here proves it with his moronic responses to these letters.