Shut the fuck up, Donny

Mariah is once again at the top of the pop charts, her body is in great shape, and now she has found true love with Nick Cannon. This is a dream come true. I can't wait to see what the future has in store for them.
Michelle Thomas
Chesterfield, Mo. 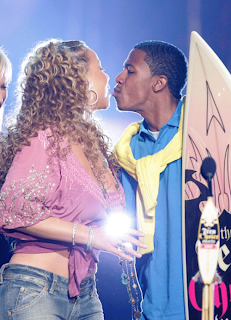 Carlton Banks practices the move Tom Cruise
taught him on a pumpkin with a weave.

Michelle,
I'm going to go out on a limb and say the future holds more shitty soulless songs filled with unnecessary melismas that will sell by the truckloads to the dumb-fuck zombie masses that keep Clear Channel Communications rolling in green rather than having their headquarters justly bombed as they would be in any kind of sane world. And also more of whatever the hell it is Nick Cannon does. Horrid Nickelodeon-level stand-up? Direct-to-DVD high school comedies? Sub-Insane Clown Posse moronic rapping? I can't be bothered to look this stuff up on somebody who doesn't even have the benefit of possessing decent cleavage.

I was heartened to notice you put finding true love behind commercial success and having a great body on your list, Michelle, because that pretty much sums up the People mindset more succinctly than I've been able to manage. A lesson for you, though, grasshopper - it's easy as hell to find true love. Keeping it going after the initial thrill has worn off and you have to deal with each other's weird insecurities and illogical mood swings and somewhat bizarre and disgusting eating habits day in and day out is quite another matter. But hey, these two appear to be emotionally mature enough to navigate such minefields relatively unscathed - with the good lord on their side, they'll come through it with only metaphorically amputated pinky toes. And really, what more can they ask for?

One last thing: When you say "This is a dream come true", do you mean for them or for you? Wait, wait - I don't really want to know the answer. Life's depressing enough.

Times, places and situations lead us to an early grave,
John

What was Mariah thinking - getting married so quickly to a much younger man? I just hope she had a prenup.
Melissa C. Sarra
Canton, Mass.

Melissa,
Maybe she was thinking, "I already married some old buzzard from the Pleistocene era; maybe it's time to go the other direction and wed a guy who's able to get it up without chemical enhancement". Or maybe "I'd better snag a man before I go shit-stick crazy again and they decide to forcibly sterilize me for the good of humanity". Then again, perhaps her thought process was more along the lines of, "Though it would wound me to upset even one of the fine, non-judgmental residents of Canton, Mass., it would absolutely kill me if I gave up what could be my last chance for true happiness". Because, you know, the entire galactic sector is constantly walking around pissing itself over your opinion.

I'm sure she got a prenup, though - surely even she knows successful, wealthy entertainers such as Mr. Cannon are the biggest gold-diggers out there.

And when I fell on the floor I drank more,
John

Montel Williams wasn't afraid to hammer controversial subjects like war, racism, AIDS and child abuse. And he didn't just talk about problems; he jumped in feetfirst to help solve them. He was a talk show host with a keen mind as well as a heart and conscience. He definitely will be missed.
Kenneth L. Zimmerman
Huntington Beach, Calif. 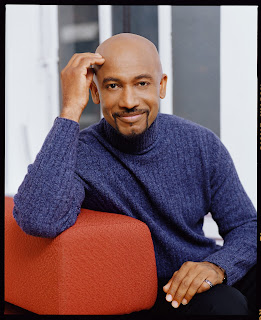 "My head? Why, it keeps my thinkin' juice
from sloshing out, you silly goose!"
Kenneth,
First off, isn't it kind of assholish to go by "Kenneth"? Fo' realz, dude - is "Ken" just not pretentious enough for you? Brevity is the soul of wit, in case you hadn't heard.

Second, did Montel Williams die? From the eulogizing tone of your letter, it sure sounds like it. If his show merely got canceled, however, you need to calm your ass down. I'm sure he can land a gig on some local cable-access station or one of the "wacky" morning zoo radio programs so beloved of sales associates and other retards. No need to freak out. M.W. always lands on his feet.

Third, I agree with you that he was brave to tackle such controversial topics. I can't tell you how many times I've turned on the news or checked the blogosphere in the hopes of hearing anybody saying anything about the war. And why can't we have any kind of debate in this country without the hordes of rabid pro-racism, pro-AIDS, pro-child abuse idiots shouting down us righteous few? I tell you here and now, it's a miracle Monty wasn't assassinated for so blatantly taking on such hot-button issues. If not for many, many other perfectly valid reasons.

Fourth, I'm going to need a cite for your claim that Montel didn't just talk about problems, because that's pretty much all I ever saw him do. Maybe you're confusing him with Dr. Phil - they are both bald and annoying. Dr. Phil's a little blacker, though. I'm also going to need a cite that "feetfirst" is a legitimate word.

Fifth, I don't know how it's possible to describe someone as having a "keen mind as well as a heart and a conscience" when they gave scumbag con artists like Sylvia Browne a weekly platform to spew their hateful lies. But maybe that's because I haven't yet achieved Buddha nature.

Sixth, though I'm sure you'll miss him, I have no doubt you'll find some other enriching activity to occupy your time between 10:00-11:00 am on weekdays. I'm guessing it will involve smoking an extra bowl of weed and coming up with new excuses for why you can't land a job. So no more tears, mister! Life's going to pass you by whether Montel's around to guide you or not.

Down in the tube station at midnight,
John
Posted by John at 3:17 PM

So Montel's not dead? Is he at least on death watch?