It's been a hectic week. Went to Vegas for a few days, which is always fun - it's the worst aspects of American culture all in one convenient location. The stink of avarice, lust and desperation wafts through the casinos' air conditioning systems, and everybody you encounter looks like they're either auditioning for The Hills or Wife Swap. What's not to love?

On the home front, I've got to contend daily with my female (and gay male) co-workers hitting on me for 8 hours at a time, due to my animal magnetism (I spray on monkey pheromones every morning) and absolutely stunning ass. In fact, a certain co-worker who shall remain nameless (Mia) cannot stop staring at it, even when she's driving a forklift, and is so obsessed she's always making Freudian slips like "So my grandfather just died and I was wondering if you could cover for me on Wednesday so I can attend YOUR ASS IS MAGNIFICENT". I swear, man: women - can you think of something besides sex at least every couple minutes or so? You're never going to get equal treatment in the workplace until you learn to start acting professional (and "stripper" and "call girl" are not the professions I'm talking about here, for the record). I would offer to give a seminar on how to conduct yourself in a corporate environment if I didn't know my offer would be answered by every single woman in the office with "Yeah, I'll attend your seminar...as long as it's in my pants!". So childish. We've got a long way to go, my sisters.

Also, a friend of mine had a family emergency, so I'm feeding his cat after work, which is no big deal, except this particular cat, much like Jeremy Piven, has a propensity for vomiting cat food and hairballs all over every inch of carpeted space in the apartment (never on the hardwood floors, for some reason) (that reason being that cats are straight from the devil). So I've taken to calling it Vomiting Cat, or V.C. for short, and let me tell you something: this V.C. is worse than the V.C. I had to fight back in 'Nam (V.C. Andrews, of course I mean). But then, nothing's as easy as it used to be, is it? Anyway, do any of you care about my pain? No, you vultures are only interested in picking over the carcasses of these poor, sweet People letter writers. Well, here you go, you soulless bastards (by the way, this is the second time since I've been doing this that Entertainment Weekly didn't have a letters page in their current issue, ostensibly because it's a Special Issue, I guess. But really, aren't all their issues special? Oh, I'm using "special" in the sense of "retarded" here, in case you just fell off a fucking turnip boat or something):

I was saddened to hear about Shania Twain and her husband, Robert "Mutt" Lange, splitting up. I can't believe he allegedly left a stunning woman like Shania for the matronly-looking lady who was supposed to be one of his wife's best friends. Shania's heart will eventually heal. In the long run, she's lucky to be rid of him. He's not a mutt, he's a hound dog.
Janice Pielert
Stamford, Conn. 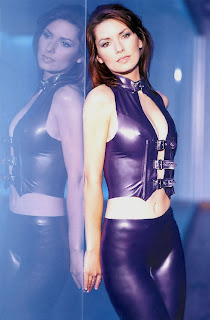 "Just one picture - I'm late for my gig as chair of
a conference on anthropogenic global warming. Do my nipples
project that necessary blend of commitment tempered by compassion?"
Janice,
Wait - you're complaining that he left her for an older, plainer looking woman? I thought this was exactly what Nora Ephron and all those horrible Diane Keaton movies wanted to happen. Jeez, you get pissed if he leaves her for some young bimbo, you get pissed when he leaves her for some old bag - what would make you happy, if he started dating a friggin' turtle? Make up your feeble mind, for God's sake.

She is lucky to be rid of him, I'll grant you - did you know he produced Foreigner? And Def Leppard? And Bryan Adams? Maybe now that he's out of the picture, her music will finally stop sucking the stank out of my sheeyot. Somehow I doubt it, though.

Them young girls, they do get weary,
John

Shania is a brave and independent woman. I'm sure she will recover from this heartbreak and be better than ever. I can't wait to hear new music from her and see her with a loving, faithful, younger man.
Kristen Komis
Miami Beach, Fla.

Kristen,
Why wouldn't she be independent? She's a multi-millionaire! It's pretty easy to be "independent" when you don't have to worry about those nagging details that compromise your freedom such as cooking or driving or doing your own shopping or having to slog through a soul-crushing job for sixty years before dying in utter obscurity and leaving an unmanageable amount of debt for your equally poor family to pay off. Yep, it takes a special brand of bravery to be able to weather the breakup of a relationship (which we all know is is precisely equivalent to being a prisoner of war for 8 years) and still manage to carry on with your hugely successful career and life of luxury. And they say there are no heroes anymore.

I don't know why you Shania fans are so hung up on age, but personally, I hope she snags an older man, myself. Preferably much older - like, old enough to believe a woman's place is in the kitchen, so I never have to hear from her again, unless I happen to be shopping in a Ross when one of her songs comes over the P.A. And if I am, at least I know the meth-heads will be distracting enough that it won't be too painful.

That Kate Hudson sure is resilient, isn't she? It's heartwarming to see how she gives herself a full week before moving on to the next man who is "wonderfully suited" for her.
Mary Burroughs
Centennial, Colo.

Mary,
You'd better not be puking on the carpet, goddammit, because I've only got one more day to feed you. I mean, I just assume "Mary" is a pseudonym and you're actually my friend's cat, because all I got from your letter was "Me-ow".

I've had relations with girls from many nations,
John
Posted by John at 4:00 PM

I find that most women will always pick out some superficial excuse to belittle the "new" woman their best friend's ex husband is seeing.

I remember eating lunch and overhearing some woman say, "...this lady he's dating now has extremely big ears. Did any of you see it? He made a huge mistake" following by an annoying burst of piercing cackles.

Oh yeah I'm sure the guy is dwelling on his past right now 'cause he dumped someone for a chick with big ears. Whatever.

You are too funny. I have nothing creative or interesting to say, though, uh...so keep up the good work. In my pants.

it's funny... the VC pukes like once a week normally. but when you watch her for three days we come home to seven piles of half chewed cat food hair balls.

what's up with that?

I think you gave the VC too much credit for that last letter...

Thanks for cracking me up...it's a funny blog you have going on here!

Wow, all this and a Billy Bragg quote too. Nice.