And Now, A Word From Our Idiots

As a child I experienced the same condition as Jacob Hanna. I didn't talk to relatives, classmates or teachers, and everyone assumed I was just shy. Like Jacob, I made good grades but I couldn't overcome my fear of speaking to people. My condition was ignored by adults who thought I would "grow out of it". Now, as an adult myself, I have anxiety when it comes to speaking in front of others - especially people who I am not comfortable with. It makes everyday tasks seem so difficult. For Jacob's sake, I hope they can find a way to make this little boy feel confident enough in himself that he can become an outgoing individual. Hang in there, Jacob.
Michelle Booe
Joplin, Mo.

Michelle,
Not to be a total dick, but I'm not sure you're exactly a ringing endorsement for Jacob eventually feeling confident with himself. I mean, if you're going to try to encourage youngsters, the first rule is to not tell them how fucked up your life is due to the condition you share. This is one reason they don't bring in fresh corpses to cheer up cancer wards.

Be that as it may, I have my own story about social anxiety to share: I once had a friend named Ben, who experienced discomfort bordering on panic when faced with any situation that involved people he didn't know fairly intimately or lots of loud conversation. His condition was made all the worse because of his chosen profession: he was a clown at children's parties. I can't even tell you how many deposits he had to refund when parents found him curled up in their kitchen cupboards chanting "Mommy and I are one" on an endless loop. Anyway, eventually his therapist suggested he isolate himself completely from the rest of humanity for a period of time, the thinking being that once he was cut off from human contact he'd begin to understand how vital interaction with others was. So Ben bought a sailboat and loaded up on supplies and headed out to the middle of the Pacific ocean. He stayed in the same spot for three weeks, until his vessel was attacked by an Orca and he drowned, sinking to the bottom of the briny deep like a burlap sack loaded with delicious ham. You know, now that I read this over, I guess my story's not much more inspirational than yours. Even so, I think we can agree on one thing: no matter what the hell you do, you're going to die.

Still, I support you in telling Jacob to "hang in there". In fact, I'm even going to include a graphic representation of the phrase in the hopes of calming the lad: 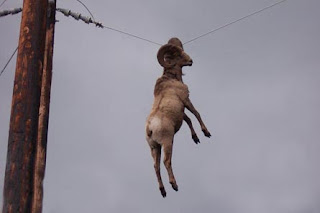 There! Doesn't the world seem a much more stable place now? Go forth, Jacob, and fret no longer!

Kudos to Fergie for speaking out about teen sex. It was a very informative story. And she said it accurately when she stated that she wasn't a perfect role model but a realistic one. A lot of young people look up to her. I think Fergie is a class act.
Billie Walker
Cosby, Tenn. 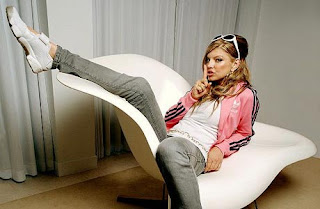 Consumer report: When your hooker's foot is larger than
her head, you've just paid for a tranny.
Billie,
Yeah, what a class act. I personally was shocked that they didn't declare her Queen of England after she sang the elegant yet understated hymn "My Humps". And now you tell me she's speaking out about teen sex? Somebody call the Pope hotline and nominate this humanitarian for sainthood!

I didn't read the piece in question, but I've also got an informative story about teen sex: I once had a friend named Ben, and he died a virgin due to his inability to interact with others. If he'd only had sex as a teenager, I wouldn't be here describing him to all the world as someone who died a virgin, causing complete strangers to snigger at the poor doomed bastard. Do you see my point? Teens should start having sex with as many partners as soon as possible, because you never know when your boat is going to be rammed by a killer whale. I believe that is also the message of The New Testament, or at least the subtext. So come on (no pun intended), teens of America! I know you all buy into that abstinence-only line they teach you in Intelligent Design class, but I for one think it's high time the youth of this nation started becoming sexually active. It's an idea whose time has come, like starting a war with Iran or making health care prohibitively expensive for the lower class. If we can all pull together (pun intended this time) on these issues, the terrorists won't have won. USA! USA! These colors don't run, motherfuckers!

I'll salute the new age and I hope nobody escapes,
John
Posted by John at 8:23 PM

Does any real human being write a letter to the editor and use the phrase "class act?" It would be cool to compile a list of phrases that I'm sure the EW editorial crew likes to throw in to cover up cluttered writing and lend to the idea that everyone thinks of Hollywood in catch phrases. Now THAT would be a real class act for the blog.

this blog is a class act.

and it's hitting a home run with THIS reader.

Jessica: There's a better question here. Does any real human being write a letter to these editors, or are they all written by Bonobos with issues?

Frankly, I'd like to know why the Royal Tart isn't given the total lack of attention she so richly deserves, instead of being called a "positive role model" by gossip rags. Or at least called out on the total hypocrisy of writing a song (if you can call it that) with the line "I'm gonna go down on you like London Bridge" (so that the music companies could blare it out the speakers at nearly every public place frequented by people under 25) then talking about the problem of teenage promiscuity. At least, I'd be curious if I hadn't already given up all hope for the "entertainment" industry and the people who obsess over it.

Kudos to the blogger for having the sense to deride the MTV-addicted, rather than encourage them. Maybe if enough people do it, someone will actually listen.