What A Piece Of Work Is Man

All right, let's catch up.

According to a friend of mine, someone I don't even know named Brandi (hereafter referred to as "Moesha") doesn't think I've been updating enough. Did Moesha attempt to spur me on by sending money to my PayPal account or naked pictures to my inbox? No. No she did not. Nevertheless, I decided to honor her wish, because it's always good to make new friends - that way, you have a larger pool of people you can potentially exploit should the situation ever require it.

Why have I not been posting as often in the first place, you (the royal "you") ask? I'll be brutally honest with you (actually, I will lie my ass off to make myself look good, as is the way of my people): going through the 47 million letters these fools have written is not my idea of a righteous way to spend my free time, so rather than trying to find correspondence to mock in a half-inch thick stack of human stupidity, I'm going to jump ahead to the letters in the current issues. Maybe eventually I'll get around to finishing the older letters. Most likely I won't. What the hell is it to you? I don't exactly see anybody whipping out their checkbooks to reward me for my fine and noble project.

Also, I'll divide the entries between EW and People - that way I won't get so depressed slogging through the hideousness all at once, and I'll update more often. So kwitcherbitchin. I am only one man. One sexy, irresistible man.

Unlike many female leads, Juno is not a superhero or a loser - she falls somewhere in between.
Kenneth L. Zimmerman
Huntington Beach, Calif.

Kenneth,
You, also, seem to fall somewhere between a superhero and a loser. Why don't we just call you a "super-loser" until some Poindexter comes up with a more satisfactory term, eh? Works for me.
Now where's that salad I ordered, motherfucker?

Every little thing the reflex does leaves you answered with a question mark,
John

Thanks for putting Ellen Page on the cover ("Juno Nation"). I'm nicknamed Juno at school for wearing flannels and being sarcastic. Anyone who says teens don't talk like Juno should spend a day with me.
Catherine Cortale
Sea Cliff, N.Y.

Catherine,
I don't think there's any need to make threats. It is just a movie, after all. Why don't we all calm down, before one of us does something they'll regret?
Anyway, I do believe teens talk like Juno, which is why I don't hang out with them. They're fucking annoying, to be honest. Especially with all that "John, maybe we should use a condom" whining. Don't try to put a bridle on me, Chelsea! I cannot be tamed!

p.s. Are you sure your nickname isn't "Juno" because you're a big ol' slut? That's another thing about teenagers: they're lying sacks of shit.

Ever fallen in love (with someone you shouldn't've?),
John

I've been in awe of Ellen Page since "Hard Candy" and saw "Juno" before it became a sensation. I was worried it would disappear quickly, so imagine my joy when mainstream audiences embraced it.
Angela Rawling
Salt Lake City

Angela,
I'm imagining your joy as kind of manic and smothering, with a faint hint of clingy desperation around the edges. Am I right? Do be sure and let me know.

How many times must the cannonballs fly before they are forever banned?,
John 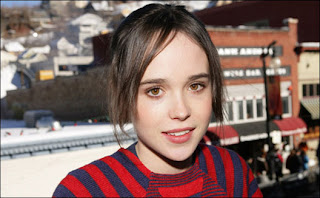 Ellen Page: Bitch, do you ever change your shirt?
As a young woman who likes quirky indies, I'm the target audience for "Juno". But I can't say I liked it. "Juno" tried too hard to be cool, which came off as annoying. I prefer the "weirdos" in "Ghost World".
Meredith Munoz
Sterling, Va.

Merde,
I'd be careful about going around describing myself as a "young woman who likes quirky indies" if I was you. That's a phrase that can lend itself to various interpretations, none of them favorable, especially to drunk douchebags in bars. Trust me - I've got the stains on my jeans to prove it. The beautiful, soul-gratifying stains.

I know what you mean about the movie trying to be too cool, though. It should try to be bland and uninspiring like most movies. Who does it think it is, Jack Nicholson? Now there's somebody who's cool without even having to try, and is not in any way a pathetic geriatric caricature depressingly clinging to his withered memories of a "rebellious" youth. If Juno had been more like Jack, it would have made me a happy boy, because then it would have been so predictable I'd never have bothered plunking down shekels to see it. Ah, Jack. Is there any problem you can't illuminate?

But I digress,
John

Did I seriously just read a review of the new Star Trek trailer (Movies)? Does this country suffer from such an acute case of ADD that we can't even wait for a movie to come out before we start to judge it?
David Drake
Henderson, Nev.

David,
Is that a rhetorical question? Or did you just plop into our modern world from the era of the Taft administration via a wormhole? Because if you did, a word of advice: when you tell people you're feeling "gay", it doesn't mean what you think it means anymore. "Donkey show" still refers to the same act, though, so some things have remained constant. At least you're not totally awash in a sea of chaos.

Thanks for telling us why Amy Heckerling's "I Could Never Be Your Woman" never made it to theaters ("Would You Dump This Woman?"). I'm bummed the movie's going straight to DVD, but I hope she keeps doing her thing.
Mark J. Parker
New York City

Mark,
Well, apparently, her "thing" now is making movies that go straight to DVD, so your entire last sentence would appear to be a contradiction. Even so, I won't hold it against you. Any grown man upset by Amy Heckerling's career trajectory already has enough going against him in this world.
I didn't read the piece in question, but perhaps you can enlighten me: did EW also tell us why some of her previous movies - for example, Look Who's Talking Too and A Night at the Roxbury - weren't released straight to DVD? Because that really seems like the bigger mystery, if you want my opinion (and you do, or why else would you have written your letter?). I breathlessly await your reply.

Balloon Man blew up in my hands,
John

How ironic Gordon Pinset of Away From Her was snubbed by your Snubbed-by-Oscar Must list. His performance was most deserving of accolades.
Grace Deacon
Levittown, Pa.

Grace,
I think I speak for everyone when I ask you: What in the name of sweet holy fuck are you talking about? Gordon Pinset? Wasn't that the guy who played Balki on Perfect Strangers? Look, do you see me going around lamenting the fact that Throbbing Gristle never won a Grammy? Of course you don't, because I do not live in Elvish Unicorn Faerieland, and I understand that nobody with even the most tenuous grip on reality gives half a wet fart about the subject. You'd do well to follow my example, and never voice your thoughts in public again. Starting...now!

You said that irony was the shackles of youth,
John

Kenny,
Of course younger ears were listening - what else would they be doing? Whistling? Baking quiche? Writing sonnets in iambic pentameter? Maybe this info bypassed you somehow, but ears are specifically designed for listening. Do I need to explain to you how vision works as well? All right: first, light (which travels, strangely enough, at the speed of sound) (1.2 meters per hour) enters your cornea (what Native Americans call "maize-ea") and then bounces around inside your head until it is processed by the hot rods and ice cream cones located at the back of your eyes and converted into a digital signal that goes to the HDTV receiver section of your brain. From there it is turned into trans fat which gets diverted to your liver, at which point it is immediately ejected violently from your body via the sebaceous glands. Once it is released into the atmosphere, it provides oxygen to the trees, allowing us all to breathe without requiring gills. Hope that clears things up.

Private eyes are watching you,
John
Posted by John at 10:23 PM