While I am happy that Matthew McConaughey has found love and is about to become a father, I wonder why he doesn't marry Camila? From what I read, he seems reluctant to take the step towards marriage and commitment. If that is the case, how is he going to handle being a father? Parenthood, like marriage, is a lifelong commitment. I wish the child lots of luck.
Stephanie Freeman
Santa Rosa, Calif.

So, Matthew and his girlfriend are expecting a love child. Mr. McConaughey is not fooling anyone. He is a man who is unable to make a legal commitment to his child or the child's mother. Unfortunately, he is only one of many. It is a shame that kids look up to these so-called stars as role models.
Pat Britton
Battle Creek, Mich. 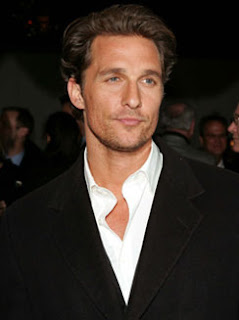 How to tell if Matt's high? He's wearing a shirt!
Dear biddies,
Since you're both looking at the issue through the same stupid-colored glasses, I'm going to lump your letters together like so much tepid mashed potatoes and respond as if you're one person. Which, given the hive-mind mentality of People readers, seems a perfectly reasonable strategy. I do hope this doesn't offend you. And by that, I mean "I don't give a fat fuck if it offends you or not". But if you've been reading this at all, you probably already decoded that yourself(ves).

Anyway, why should he marry Camila? He already did her the honor of fucking her silly (literally - how else to explain her decision to keep his child?); however she chooses to react to the consequences of his selfless act is all on her. As I grow increasingly weary of reminding you all, this is the 21st century- she's not going to be burned at the stake for having a child out of wedlock, and if the kid's going to grow up in L.A., I guarantee you half the children in its kindergarten will be in exactly the same boat. Anyway, why do you make the mistake of equating marriage with commitment? I've been in a relationship for 9 years without getting married - are you telling me couples who got divorced after a year were actually more committed than I am? Pardon my French, but if that's what you think, you're one dumb-fuck heap of stool. Guess what, heap of stool? Marriage is nothing more than a gesture, some "official" pronouncement printed on cheap paper that's as meaningless as its epilogue, the restraining order: if you're determined to violate it, the empty words typed out by some bureaucrat aren't going to be enough to stop you.

Besides, haven't you seen Matthew McConaughey? He's dreamy! All glistening and incoherent, just like an astronaut! Heck, I'd have his baby if I could. Sadly, my womb is as barren as a cookie jar at fat camp.

Anyhoo, I don't know why you feel the need to wish the kid luck - there's obviously nothing to worry about genetically (pot doesn't fuck up your chromosomes, in case you missed the results of that particular Reefer Madness scare in your Leave it To Beaver bubble world), and the kid's trust fund is probably already several times your lifetime earning potential. And no doubt the tyke will be loved - have you ever been to Hollywood? Damn near everyone there tells you they love you at the slightest opportunity. It's the most beautiful place on Earth (aside from Arby's when you're really hungry).

Playing that creepy dude in 'Dazed and Confused' was the only role I ever liked him in. Now I'd have that guys babies.

That's the only role I ever liked him in, too. In fact, it's the only movie he's been in that I can even remember the name of, which is why I used it as an example. I'm not going to go through the effort of directing my browser all the way over to the IMDB just for his stupid ass.