Welcome To The Terrordome

Greetings, new friends! Thanks for all the e-mails. I'll get back to everyone eventually. Or not. I can't predict the future. Or can I?

Your sidebar claims political movies have had a hard time at the box office recently. What a silly observation. As if such fare is catnip to theatergoers!
Joe Andros
Capitola, Calif.

Dear Joe,
When you wake up in the morning, do you slap your forehead and think, "Oh no! I'm a stupid mongoloid!", or does your brain just play a continuous loop of a chimp banging cymbals while you gently wet yourself? Your catnip line makes absolutely zero motherfucking sense for any number of reasons, chief among them the fact that catnip has no effect on theatergoers (or any other humans) one way or the other. Second among them would be that even if catnip did have the same effect on people it has on cats, that effect would be to actually make them happy, which kind of negates the whole point of your letter (unless you were trying to be sarcastic - which, I have to tell you, is an exercise in pointlessness when you're writing for EW readers). Or else you're pointing out that political movies aren't catnip to viewers, and thus it was a silly observation on EW's part because it seemed self-evident, in which case you felt the need to expend energy and time pointing out how futile their observation was with an equally-futile-by-definition observation, which seems like utter insanity, if you ask me. The fact is, it's unclear what the hell you're trying to say, so I'm going with my first interpretation. I'll give you the benefit of the doubt, though - you probably meant to use the word "anathema" and confused it with "catnip". It's a common enough mistake. I myself frequently say "Suck my dick, bitch!" when what I mean is "Thank you very much". That particular slip of the tongue has led to many an awkward conversation, let me tell you! Although I imagine going to the pet store and asking what aisle the anathema's on can be fairly embarrassing as well. See, we've found a common bond! And isn't that what this whole process is really about? So please, rather than take up any more of your obviously precious time, allow me to say "Suck my dick, bitch!" for your letter.

Papa was a rodeo,
John

Miley (Cyrus), keep the hair, tone down the makeup. You're only 15 once!
Sue Dozier
Louisville, Colo. 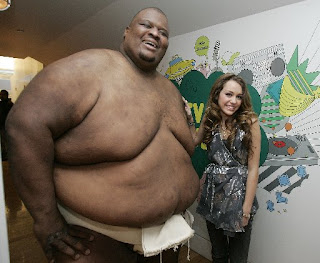 Miley Cyrus chats with long-time fan The Planet Jupiter
Sue,
Guess that depends on your definition of "once". As I recall, you're 15 for an entire year (four years if you were born on Feb. 29th!). And I think even you'll agree with me that a year is an awful long time to go without painting your face like The Joker's personal whore, especially for a teenager. Everybody knows that young women have self-image issues, and if there's one thing our culture has taught us it's that girls are naturally unattractive and should slather on as many cosmetics as necessary to hide this horrible truth. Haven't you ever hung around with a group of guys? All we do is sit around and talk about how so-and-so applied an insufficient amount of rouge or what's-her-name picked the totally wrong shade of mascara to go with her eyes. It's a harsh reality, and maybe when evolution stops selecting for butt-ugly females things will change. But until then, how dare you try to shame poor Miley for doing the very thing society demands of her. You know what happens when you attempt to live outside society, Sue? You end up starving to death in an abandoned bus in the middle of Godforsaken Alaska, that's what. Why do you want the poor girl to starve to death in some fucking hippie bus, Sue? What did she ever do to you? Except make you feel incompetent for accomplishing more before she hit puberty than you have in your entire life, I mean.

While we're on the subject, I don't know why you thought it was necessary to tell her to keep the hair. What did you think she was going to do, shave it all off in some drunken bid for attention/cry for help? I'd like to see the day one of our young pop stars resorted to that. Surely such an act would signal the imminent doom of everyone now living. Please stop imagining such preposterous scenarios. That's what we pay J.K. Rowling and the White House Press Secretary for. Now, if you'll excuse me, there are nachos to be eaten.

The roar of the masses could be farts,
John
Posted by John at 4:44 PM

I just want to say "Suck my dick, bitch" for such an awesome blog!

I think I'm falling in love... Actually your recent selfless act(I won't tell anyone) confirms this. I had thrown away my Teddy Ruxpin... donated my buttplug to the homeless and taken up Kegeling for Jesus all in the name of serving you better. And then you go ahead and trump yourself. What a man... sigh, your wife is lucky indeed. (She Bi, baby?)

You really do make work bearable, and since I work at a Children's Hosp, it's all the more a precious thing (fucking people, they're the worst).

I'd like to especially thank the lass at Violent Acres for not only her own mind-blowingly awesome blog, but also for steering me your way. You're right up there with my fave blogs, Vi. I love you!

you're writing is great. very funny. :)

I shaved my head about 3 months ago...it was a blast. I didn't do it for attention or some other retarded reason. I did it to be different. and it's awesome. how many 18y/o girls do you know who shave their heads for the hell of it. :P

oh...speaking of different, I think it'd be fucking awesome to die of starvation on a hippie bus in the middle of Alaska. noone ever dies that way. original death is the best.

anyways....I'll be reading. :) good luck with everything.

I recently came accross your blog and have been reading along. I thought I would leave my first comment. I dont know what to say except that I have enjoyed reading. Nice blog. I will keep visiting this blog very often.