I Love My Dead Gay Son!

Look here, folks: I said I was going to update this every day. I did not say I was going to update this every day at 5:00 am on the dot so people on the East Coast could read it over their morning lattes. It seems some of you are under the impression that I'm your trained monkey, eager to amuse you at your collective whim. Well, I've got news for you: slavery ended in this country over 40 years ago, racists! As long as I post an entry at some point within the 24.067 hours that constitutes "Tuesday", I have kept my promise. Open a book about our treaties with the Native Americans if you need more examples of what constitutes fair and legal agreements among different parties. In fact, just because some people couldn't refrain from pestering me, I'm only going to post one letter today. Hopefully this will teach us all an important lesson about respecting others, as well as the unforeseen consequences of venereal disease. Also, it will give me a free day to post the entry about Matthew McConaughey I was going to include here, so that I may lie around leisurely in a kiddie pool filled to the motherfucking brim with equal parts Alpo and whipped cream, as is my wont.

Conan O'Brien's strike diary provided much-needed levity. My own supply of DVR'd shows was dwindling, so I needed something to take my mind off the pain.
Kimberly Ciesiolka
South Bend, Ind. 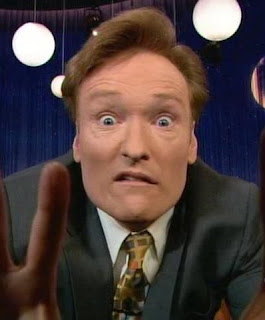 I myself didn't read Conan's strike diary - I don't read anything other than Danielle Steel and Big Booty Bitches mag, as together they tell me everything worth knowing about life in the modern world - but I managed my own pain with liberal doses of Oxycontin (though, in the interest of full disclosure, that's how I manage when I'm not in pain, as well). How you were able to cope without a team of humanitarian relief workers at your side is beyond me - you must be one courageous sack of humanity to have survived such an ordeal. Maybe you should write out your heroic story and send it to the Lifetime network - I bet they'd make a Lifetime Original Movie out of it! Maybe even starring Valerie Bertinelli, now that she's back in the spotlight for having learned to not binge-eat. I'm not even being sarcastic, either. I'm pretty sure somebody over there would be willing to greenlight this.

Anyway, I'm sure there are many people who'd tell you, in the supercilious tone middlebrow white people love to adopt, that instead of suffering due to the writers' strike, you could have gone out and experienced life rather than watching actors simulate experiencing life: maybe sign up for a class at the local community college or go to a cafe to meet new people, or make the time to appreciate the everyday miracles we take for granted: the sunset that would never contain quite the same hues as any other, or the serene majesty of a local lake, or whatever the higgedy-hell it is that such people are always popping boners over. But we both realize they're really just obnoxious pricks, and fucking liars to boot - when people claim they "don't watch TV" it's code for "I watch about 47 hours a week more than you", and the ones who claim to not even own a TV simply watch everything on their computers (which not only makes them cheap, but thoughtless - they apparently don't care that any guests they might have over are going to be forced to sit around staring at their goddamn walls all night, like common refugees). I only hope you didn't completely run out of DVR'd shows before the strike ended, because otherwise I don't even want to imagine the agony you must have endured. In fact, the mere thought of it has me reaching for the Oxycontin right now. Sweet, beautiful Oxycontin. You are my lover, and the only one that truly understands me. Ahhhhhh, there's the stuff. Life has once again been elevated to the level of "tolerable" thanks to the tireless work of this nation's many selfless chemists. Now if only that horrible fanged polka-dot cow fetus that lives in my toilet and incessantly taunts me about my womanly calves would disappear, I'd be a pig in shit.

My previous comment was deleted as I wanted to rewrite it (I am a chronic rewriter) and of course, the moment I posted it, I thought of one and a half clever things I could have written, so here is the amended comment (likely the longest, strangest comment you are likely to receive, but, really, I think you brought this upon yourself). The "s" is short for "Shit, my boss is coming. I really need to get off the computer now." I am a bit shocked, really, that you couldn't decipher that.

First, I am hurt and offended that you would even think I would watch episodes of According to Jim? Did my brief letter to EW somehow imply masochism on my part? For shame. Secondly, the aforementioned Valerie Bertinelli. Really? You are so off base. My go-to Lifetime movie gal would be Melissa Gilbert, not Valerie Bertinelli (though, again, both are too old to be portraying me in any movie).

No Lifetime movie for me, though. I am more independent movie fare. Only an independent, documentary-style film can capture the true pain and heartache that was my life during the writers' strike. I have already chosen Alyson Hannigan to play me since we are the same age; except for the fact that she is prettier, thinner, more talented and with better hair, we could practically be twins.

My independent movie would be written by me, since no one else could capture the horror that was my life during that strike, especially when I finally broke down and watched those final last few situational comedies, tears streaming down my face mingling with the sweet laughter. Such a bittersweet time, filled with sadness and loss and pints of Ben and Jerry's.

And you, anonymous blogger guy, who will portray you in my life movie? Who has the depth to sit at that computer and type of someone else's misery?