I do apologize for the absence, but last week was my birthday, and the way I understand it, that means I get to do whatever the fuck I want for seven days straight, including ignoring all my responsibilities (blogging, personal hygiene, obeying the bitch-ass "law") and making out with anyone I choose, consequence-free (I'm looking at you, Justin Timberlake! We could make a beautiful man-baby and name him Blanket!). In other words, I lied when I said "I apologize".

Also, I've been working on re-vamping an older music-related blog I used to do, which I'll unveil shortly. Hopefully I'll divide my time between writing that one and this one, which will no doubt satisfy my extreme ADD personality type. Now, if you'll shut up for a minute, I'll get to the feature presentation.

A woman as stunning and talented as Tina Fey shouldn't be allowed to be married to just one man.
John Hardin
Los Angeles 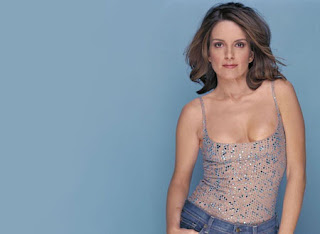 L. to R.: Rachel Dratch (Photoshopped out), Tina Fey
Dear John,
It's a sad state of affairs, to be sure. Next thing you know they'll allow intelligent, attractive women to vote, or earn as much as men in the workplace! Then they'll be ovulating all over important documents (I'm not quite sure what "ovulation" means) and turning the water cooler into a den of gossip! Oh, I can just hear the constant hen clucking now, like a drill boring directly into my head-meat. Why did we ever decide to come out of the Middle Ages?

On the other hand, rather than the draconian solution you propose, maybe we could just let her marry one man and sleep around on the side. That arrangement's seemed to work in the past (and is, in fact, precisely how the entire country of France has been populated). Don't fret, son - I'm sure you'll be right on the top of her list. Now run along, before I feel the urge to vomit on you. Metaphorically, I mean. Also literally. I've driven farther than L.A. to puke on someone, believe me.

Gordon is a moron,
John

Although I enjoyed your tribute to Charlton Heston ("An Epic Life"), I was disappointed he wasn't on the cover. Every Easter I watch Ben-Hur, and Soylent Green and Planet of the Apes are uncompromised in their uniqueness.
Liz Fajardo
South San Francisco 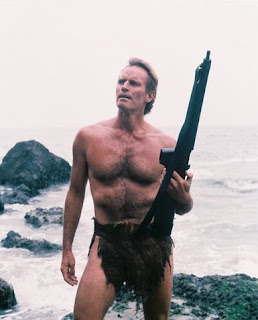 What's wrong with this picture? (Hint: Everything.)
Liz,
I was also shocked - shocked, I say! - that they didn't put Heston on the cover. Who does EW think its readers are that they wouldn't want a cover pic of some thousand-year-old fossil to tape onto the inside of their lockers? Especially a thousand-year-old fossil who's done so much iconic film work in the past couple decades? Who will soon forget his stirring role as the voice of "The Mastiff" in 2001's "Cats & Dogs", or the Oscar-worthy performance he turned in as "Eugenie's Father" in 2001's (the man was on fire that year!) "Town & Country"? And as the baby Jesus is my witness, I can't even speak of his work as "Narrator" in "Bagpipe: Instrument of War" without choking up like a gay.

I should point out, though, that it's somewhat difficult for a film to be "uncompromised" in its uniqueness (whatever the hell that means) when said film is basically high camp even when not seen only in retrospect. In other words, cheesy lowbrow sci-fi with O. Henry endings have made so many compromises by the time they're committed to celluloid that only a damn dirty ape could claim any integrity for them whatsoever. But I'm sure I'm not telling you anything you didn't already know.

It's a nightmare, it's all negative, nothing matters and what if it did?,
John

p.s. South San Francisco? Jeez, Liz, do you live in a carpet warehouse or an oil refinery or something?

Your article "Going To Pot" asked the question "How DO you get stoners to leave the house?" Well, that's easy: offer a free small popcorn with the movie ticket.
Michele Holley
Sanford, Fla.

Michele,
Shut yer ovulating yap, woman! I already have to deal with the goddamned elderly loudly pointing out every single plot point to each other and dumb-asses text messaging throughout the movie; now you want to add some potheads giggling at inappropriate moments and not being able to discern whether they're whispering or shouting to the mix? Why not just open the theater to friggin' pigeons so they can fly around and crap on my head, while you're at it? Does nobody have compassion anymore?

Luckily, your plan would never work, for a couple reasons:
First, have you ever seen the small popcorn? That wouldn't lure a starving midget to a movie (Well, maybe Jeremy Piven). The small is basically a thimble, and if you add any fake butter, it's going to push your popcorn right out onto your ugly lap. No way is that going to attract a mob of hopped-up slackers with the munchies. The theaters would have to offer at least a free medium popcorn (which inexplicably comes in a container 20 times larger than the small), and the chains will never fork out for that as long as Jack Valenti's alive. Or dead and running Hell, which is his current occupation, I believe.

Second, I, like most great Americans, have driven stoned as a youth, so I know for a fact that by the time the stoners tooled into the parking lot after engaging in interminable digressive arguments about which film to see and then driving 5 MPH for the next hour to get there, the movie would already be halfway over and they'd just decide to go to Baskin-Robbins instead. Thankfully, the predictability of people on drugs will always work to foil your nefarious plan. If only we could legalize medical marijuana, maybe I'd be free of the old people and their conversations, too. Everybody has a dream, and this is mine. Well, this and the one where I'm back at my high school graduation and it turns out I don't have enough credits to graduate for some reason, but that one hardly seems relevant here, so I'll refrain from bringing it up.