Wake Me When It's Over

These two (Jay-Z and Beyonce) were meant for each other. And because they are very private people, they're going to have something you rarely see in Hollywood: a marriage that lasts. Best wishes, Jay-Z and Beyonce.
Erica Howe
Norristown, Pa. 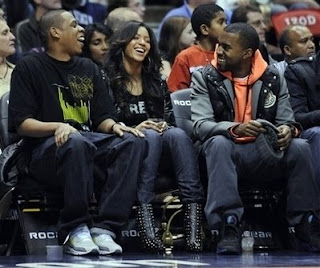 "These people behind us? We own them!"
Erica,
I know, right? Man, I really wish they weren't such private people, too, because it's so hard to find any information on them and their highly intriguing Lives of Mystery. If only they'd hire PR reps or something, maybe they could land some Pepsi or Budweiser commercials, or start their own clothing lines, or buy shares in basketball teams, or produce a string of number one albums, or perform to sold-out crowds in huge fucking arenas, or star in films, or own sports bars set to expand to international locations, or start buying up half the real estate on the Eastern Seaboard, or get saturation media coverage every time one of them makes lip-fart noises or something, but their refusal to engage in the usual "star trip" behavior means we'll have to try to fill in the blanks as best we can. Near as I can tell, Jay-Z likes to spend his time perfecting his own blend of herbal tea and tending to his modest tomato garden, while Beyonce enjoys quiet evenings at home in their cottage knitting and playing Second Life. But this is all hearsay and peyote ramblings. Maybe one day they'll decide to break their Garboesque silence and allow us mere mortals a glimpse into the human beings behind the mystique, but I wouldn't count on it - they don't seem the types to crave attention.

I think you hit the nail on the head about the prospects for their marriage, as well. I'm no certified psychologist - though I do maintain a thriving practice - but it seems to me these two have what it takes to go the distance. And I don't just mean unlimited access to high-grade amphetamines. No, what brings most committed relationships to a bitter, murderously vengeful denouement is the inability of one or both parties to compromise. But neither Jay-Z or Beyonce, from what I can see, possesses a huge ego, so they should have no trouble in that department. In fact, I'm certain it will be nothing at all like the Whitney and Bobby Brown debacle. Unless you're some kind of racist, the parallels just don't exist - I mean, Jay-Z can't even sing! Anyone who'd even make such a prediction can feel free to eat the poo currently percolating in my lower intestine. Lord knows I hate to bust out the scatological insults, but I'm just so darn tired of this generation's cynicism and unwillingness to believe in the power of love. So I repeat: Help yourself to a heaping serving of my ordure, naysayers! Do not be jealous because the two greatest musical geniuses of our age have formed a blessed union, even if it appears to have more in common with a corporate merger than an actual romantic partnership. That is the hallmark of the Marriage of the Future, and the future is now. And, as always, the great artists are leading the way.

Now, if you'll graciously excuse me, I believe my Pop-Tarts are burning again. Motherfuck!

She came from Greece, she had a thirst for knowledge,
John

Lucia,
Gosh, what a funny reworking of an old adage! You know what was even funnier? When Nick Lowe reworked the adage the exact same way 25 years ago for his song - wait for it - "Time Wounds All Heels". It appeared on his album The Abominable Showman, a term you could probably use in your next letter to People to describe the work of Dane Cook, say - I bet all your friends will compliment you on your wit when you drop that little bon mot and pass it off as your own! Maybe you'll even get lucky and land a job writing sketch comedy - I happen to know this great "Dead Parrot" skit that's guaranteed to get you declared a genius! And if you're still worried about your place in history, be sure to ask me about the "Who's on first?" routine. Hint: "Who" is somebody's name. Get it?

p.s. Keep it real in Oaktown! Maybe I'll see you jogging around Lake Merritt! Through my binoculars, I mean. Jogging's for assholes, if you ask me.

There are no answers - only reasons to be strong,
John
Posted by John at 11:48 PM