Regarding the closing sections of my responses: There's no great mystique to it - I pretty much just use lyrics from whatever song's playing on my mp3 player at the time - or, if it's too embarrassing a selection, I just try to come up with a song that has lyrics somewhat suitable to the topic.

I mentioned my upcoming music-related blog yesterday, but I forgot to link to my friend Paul's (the guy I'm working on the book project with) own music blog. Read it. The man knows his shit.

'Nother thing I was asked about (for some reason I find it easier to deal with all this stuff here, rather than e-mail the person back - maybe I'm an exhibitionist. Or maybe I just don't want to get caught in a never-ending correspondence): Is any of this political? It seems like a strange question, but I actually do consider the concept and content of my blog political. If I were to make it overtly so, however, it probably wouldn't be funny, and I already have enough trouble not going over the top with righteous indignation just responding to these sub-moronic letters as it is. So, at the risk of ruining something by explaining it too much, I'll simply state that if you think I'm in any way right wing, you're not only missing the point of this blog but probably also fail to see the humor in it at all.

Shameless self-promotion: Please click on the "Humor Blogs" link to the right - it gives me "points" with that site when people navigate there from my page, which in turn allows me to...get a half-price Slurpee or something. I don't know. I can't be expected to read the text of every form I agree to the terms & conditions of. So, click on it. Or don't. To be honest, it's not a big priority for me.

Finally, I'd like to apologize for the caption of John Krasinski in this entry, because I actually like him (on TV, I mean; I haven't been stalking him or anything) (yet), but the other letters I picked didn't lend themselves to pictures. If somebody ever writes a letter about Jeremy Piven, however (fat chance!), be assured I'll mean every word of my mean-spirited caption. Now...To the Batcave!

What were you thinking, giving Funny Games - which made Hostel: Part II look ingenious - a B+ (Movies)? It had not a shred of intelligence, from its ridiculous plot to its bad music to its overly long scenes. Please tell me that your review is an April Fools' joke come early.
Damion J. Rowan
Montreal

Damion,
I always shout out "April Fools!" when I come early. It masks the shame and diverts my partner's attention long enough for me to run into the shower and cry. Man, that was way funnier in my head.

As for the rest of your letter, I can't claim to know the reviewer's motives, but I could point out that most of the folks who write for EW have all the brains and aesthetic sense of a honey-cured ham, or that they, like honey-cured hams, tend to buy into the fallacy that anything made by a European director automatically has more depth than similar American product, or even that reactions to art are subjective even to those trained in critical analysis. But most likely the guy just enjoyed looking at Naomi Watts' tits for two hours. Occam's razor saves the day once again!

Beautiful love where have you gone?,
John

Wow! After scoring so poorly on your "Ultimate TV Quiz," I was amazed at how little television I actually watch. Good for me.
David Kaufman
Frederick, Colo.

David,
Unfortunately, that good is nullified by the fact that you read Entertainment Weekly and waste your time taking its quizzes. And also by the fact that you write a letter for publication that basically consists of patting yourself on the back while simultaneously implying the majority of said publication's readers are inferior to you. Other than that, though, you're awesome!

She was a winner who became a doggie's dinner,
John

I love your magazine. Thanks for featuring the clever, handsome, smart, and humble John Krasinski in Spotlight. If he were an English teacher in an alternate universe, then I'd love to be the quiet art teacher down the hall, trying to build up the courage to steal him away from the biology teacher (who'd be none other than Rashida Jones!).
J.K. Robinson
San Diego 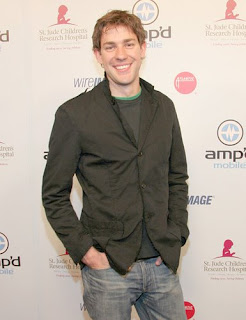 More exciting: The wallpaper or John Krasinski?
J.K. (I wouldn't use my full name, either),
Wow. Sounds like you've got a fantasy world to rival that of your fellow J.K., Ms. Rowling. And while both your fantasy worlds result in some vaguely disturbing work, at least she's found a way to make some cash off the deal. You, on the other hand, seem to have invested an obscene amount of time in concocting this elaborate "alternate universe" based entirely around someone you will, in all likelihood, never even come into contact with (unless you end up playing out some creepy Travis Bickle-type scenario), and you've even cast, as your rival for his affections, the actress who played his girlfriend on TV. As we in the psychiatric profession tend to say when presented with such cases, you're out of your liver-snap mind, bitch (though I admit that whole teacher triangle idea might make for some fun threesome role-playing, if you're so inclined [and something tells me you are]). First off, nobody's going to date an art teacher - they're one step up on the pathetic ladder from singers in up-and-coming indie rock bands. Trust me, no matter what people might say, they're not really happy to have you sleep on their couch for months at a time and listen to you whine about how the mainstream doesn't "get" you. Secondly, I'm thinking I could make a mint starting a support group for those who confuse TV characters with the actors who portray them, 'cause it sure seems there are way more of you walking the streets than I would have imagined. So thanks for the inspiration. Third, it's my professional opinion that you should maybe buy a goldfish or something. You need to start small. After becoming acclimated to the fish, you could work your way up to a turtle, and if you're lucky, in another decade or two, you'll be ready to interact with normal human beings. Good luck with that. Freak.

I'd be willing to wager that it don't matter much if we keep in touch,
John

Now this response is just straight-up harsh. Who can blame a gal for harboring such a crush on Mr. Krasinski? After all, he is an essential one-third of my John Krasinski/latex/marshmallow fluff fantasy.