To me, reading is one of life's great pleasures. While the Kindle may be functional, it doesn't have the artfulness of books or the accessibility of the library.
Marsha Lakes
Bend, Ore.

Marsha, Marsha, Marsha!,
Do you live in the library? Because unless you do, I fail to see how it's more accessible than a Kindle, which is portable and wireless, for Christ's sake. Don't get me wrong - the public library system is one of the few examples of the egalitarian principles this country was founded upon to be put into practice, and you won't hear me badmouthing it. But the only people who consider the library "accessible" in this newfangled age of the internet are the homeless (who spend their time in the library mainly to, ironically, surf the internet). For the rest of us, it's become a place we're reluctantly willing to walk to because we're too cheap to pay retail and/or too jittery to shoplift from Barnes & Noble (Those cashiers' eyes are on you like a hawk!).

Another difference between the library and a Kindle, in case you're compiling a list, is that while they both provide you with a large number of publications, the Kindle's stock is far less likely to include terminally boring crap like An Illustrated History of Chimney Sweeps or How To Repair VCRs for Fun and Profit! or the fiction of Nathaniel Hawthorne. Plus, you can't pull a public library out of your purse and whack some guy across the face with it when he's feeling on your booty down at the club. On the other hand, you can't tell your parents you're going down to the Kindle to study when you need an excuse to go dry-hump your boyfriend while his parents are out of town, either. So let's just concede that, when it comes to inappropriate groping, they both have their selling points.

You lost me with the "artfulness" of books, though. They're just words printed on some form of paper, which has pretty much been the way the written word has been disseminated since we stopped painting shit on cave walls. If you ask me, it's high time those eggheads in Silicon Valley came up with some technology to make reading cool. Like if they could find a way to transmit the data directly into your brain via some kind of psychedelic laser beam or something, preferably zapped into your head from a big gun strapped to the back of a flying dolphin. That shit would be fuckin' rad, yo! Motherfucking flying dolphins. Also, the dolphins would be ATMs. And they would occasionally fight ninja zombies. Man, why can't science ever do something to make life more enjoyable? This world sucks.

I'll say it like it's unrehearsed but I said it in the bathroom first,
John

In 1999, my husband and I went to Sydney and, while there, took in the Heath Ledger movie Two Hands. It was a quirky, fast, and furious film that left us completely amused - and instantly smitten with Ledger. I was in NYC when the news broke of his death. I was stunned like everyone else and felt a deep connection to Ledger that stemmed from my memory of watching Two Hands.
Jennifer Barnes
Long Beach, Calif.

I wasn't just a Heath Ledger fan. As an aspiring actor, I was invested in his career. When I saw 10 Things I Hate About You, I said, "He's one to watch." And I did. I reveled in his Brokeback Mountain performance. I bragged about "my boy" stepping into the Joker's iconic shoes. It's strange to feel so tied to someone you've never met - my thoughts are with those who truly knew him.
Jeremy Gardner
Norwalk, Conn. 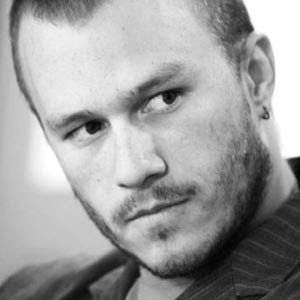 By cracky, that corn dog be looking damn tasty!
Jeremy,
You're right, it is strange to feel so tied to someone you've never met. Maybe you should pass that little nugget of wisdom along to your fellow People reader Jennifer. The first step to recovery is admitting you have a problem. Unfortunately, there are about 200 much more difficult steps after that, which is why most people remain fucked up. I'm not saying I don't have faith that the two of you won't be able to overcome your disturbing Heath Ledger obsession. I'm not saying I do have faith in it, either. But mostly, I'm not saying I do.

I don't really understand why you were invested in his career just because you're an "aspiring" actor. I mean, I'm an aspiring millionaire, but you don't see me stalking Donald Trump. Well, you do, but mainly because I'm hypnotized by his enchanting scent. Anyway, what does your playing a tree in some Connecticut dinner theater production of The Wind in the Willows have to do with being "invested" in Heath's career? Are you equally invested in Ruth Buzzi's career, or David Hasselhoff's career? Of course not - nobody is, including their agents. Anybody who's reading this with half the brain God gave a dingo knows you're not enamored of the craft, but of the celebrity. And now that the guy's pulled a James Dean, all you drama queens are coming out of the woodwork to try to insinuate yourselves into the tragedy. And quite idiotically, too, I might add. Let us dissect:

Do you expect us to believe you said "He's one to watch" after viewing him in a teen comedy? I didn't think anybody but People staff writers spoke like that in real life, but maybe things are different in Norwalk. And by "different", I mean "unspeakably retarded". Did you really "revel" in his Brokeback performance? Tell me, what was it like? Did you feel drunk on the nectar of life? Did you toast the projectionist? Did you wait until everybody left the theater and then stand up and do the slow clap non-ironically? And who on Earth did you brag to when he got the part in the new Batman film? Strangers in line at Wendy's? Because I'm finding it difficult to imagine you having any friends if you're going around calling a world-famous movie star "your boy" as if you grew up together and he finally broke out of the stultifying environment you'd both always dreamed of escaping. Anyway, shouldn't he have been the one with bragging rights? Like, say, "Hey, I just landed the role of the Joker - and I'm stoked as hell not to be that crazy bastard Jeremy Gardner!"? So many questions.

As for you, Jennifer: You know what? Fuck it. I'm getting off work. Why don't you read over your own letter, then you can write me an essay about why it's so lame. Believe me, it shouldn't be hard at all.

I just found out the name of your best friend,
John
Posted by John at 5:34 PM