He Was Gone Before Autumn Came

So, as I've mentioned, I've had some dental nightmares lately. In fact, my dentist - I guess because he was tired of me destroying his exam chair by digging my fingers into the armrests and leaving a pool of sweat in the seat every time I came in for a checkup - referred me to what I can only call a Dentist For Pussies, where they actually offer you a general anesthetic for basic dental work. This brand of insanity is just the thing I'd been looking for in a dentist (and, really, in any kind of intra-species contact), so I made an appointment. How bad could it be, right? Turns out it could be $17,000 worth of bad, because that's what they wanted to charge me for the dental work I needed. Oh, and they only accept money up front, so it's not like I could just go in and tell them to bill my insurance. I tell you, I don't know who's got 17 grand to throw away on their teeth, but if I was going to spend that kind of bank on my mouth, it would be to surgically attach a breast to it. So I look forward to a long life filled with pain and unnecessary suffering (which is pretty much how I'd pictured it going since I was 12 anyway) unless I can con somebody in one of those European nations with socialized medicine into marrying me. Not France, though - I see no point in having perfect teeth if I have to spend my time using them to argue about post-structuralism at every meal. Not to mention the fact that they have the worst TV programs in the industrialized world - which is saying something, as anyone who's ever spent time in Mexico can attest. Also, they seem incapable of producing a decent rock band. But then, so does everybody else at this point. Who cares? I don't even know what the hell I'm talking about at this point.

While I understand that celebrities work hard for their cash, I find it obscene what they spend their money on: million-dollar cars, $100,000 weekend-long birthday parties, shopping sprees and mansions - the list is endless. Bravo to Brad and Angelina for donating their time as well as millions of dollars to charitable organizations. They are what's right in Hollywood.
Sandra F. Schillfarth
Nottingham, Md. 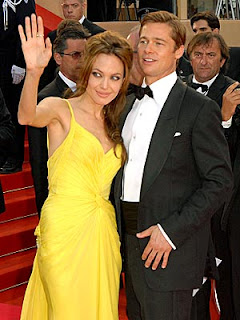 "Do I hear $5,000 for this mint-condition Cambodian baby?
$5,000 to the lovely woman in the yellow dress!"
Yo Schillfarth,
When you say "They're what's right in Hollywood", I assume you're excluding the Tomb Raider films, as well as Alexander and Ocean's Thirteen and Mr. and Mrs. Smith and the rest of the unbelievably shitty movies they've made. On the other hand, those very shitty movies are what's allowed them to continue their philanthropic work, so maybe we should all go buy them on DVD - our suffering at having to watch them is nothing compared to the suffering Brad and Angelina can alleviate as the world's first real-life superhero couple. It's not like they're going to spend the money on mansions or shopping sprees! Oh, no. Why, these two are so unprepossessing that Brad comes over to my place to play poker every Wednesday, which is when we drink PBR and discuss the most effective methods for ending poverty within two generations. It's amazing - he treats you just like he's on the same level as you, even though he obviously doesn't suffer from halitosis or bouts of crippling depression! And you're right - he works hard for his cash, unlike us lazy assholes who don't have jobs in the entertainment industry, yet he still finds the reserves of inner strength to adopt babies at the rate of 1.887 a day and smell like a bouquet of roses at all times! I don't really know Angelina (I only fucked her once), but to hear Brad talk about her, she's an even more stupendous specimen. For instance, did you know she once froze time just to save a pigeon from flying into a window? And she can shoot lasers from her eyes. But she only does it to perform eye surgery on the myopic - she never uses her power as a weapon. She could, though. We're all here only through her grace. Remember that the next time you start talking shit about the animation in Beowulf. You are insignificant, and if you can't show the proper respect, the rich and famous are well within their rights to eat you and your family in a decadent cannibalistic orgy. It's called survival of the fittest. Read up on it (it's in the Bible, I think).

Interrupting my train of thought - lines of longitude and latitude,
John

No wonder Berlin Zoo bear Knut is having the blues. Wild animals belong in the wild, not in an unnatural environment where thousands of screaming fans stand around gawking and applauding. Animals have their own agendas. Knut isn't addicted to fame, he just wants a life free of human interference.
Timothy J. Verret
Austin, Texas

Timothy,
Sounds like we'd better keep Knut away from Courtney Love, then. Tell you what: You alert the proper authorities, and I'll sit here and pretend to give half a shit about some fucking bear.

Bless you for featuring Stephen Malkmus, one of the most talented musicians out there ("Slanted and Enchanted"). America, go buy the first three Pavement records: You'll thank me later.
Luke Wienecke
Annapolis, Md.

Yes, thanks, EW! A Stephen Malkmus article in 2008! I can't wait for your Sleater-Kinney feature in 2047. I suggest you name the piece "Call The Doctor" ('cause it's one of their album titles, dicks!), and then underneath the headline, you can add: "...Because these ladies are on fire!". But, being Entertainment Weekly, I probably don't need to give you writing advice. Not for free, anyway.

p.s. America, don't prove your stupidity by buying the first three Pavement records. This is the '90s - you can download them for nothing! Just type "Pavement Bittorrent" into Google or go over to Isohunt. We're in a recession, you know.

You should talk to my dentist, Dawn Dukes.

She's up in El Cerrito, a short walk from BART.

Brad Pitt wasn't in Alexander. That was Colin Farrell. Pitt was in Troy - equally gay, but not half as horrific as Alexander. I'm not giving Pitt an out, as I think he's a douche, but Alexander was such a travesty that anyone involved really should be shot. Those involved with Troy? Maybe merely tarred and feathered.