I feel an apology's in order: I've been phoning it in all week, and this entry is the weakest yet. I'm hoping that if I get some sleep tonight, perhaps I'll stop half-assing it. Pray for me. Pray for us all.

Will Smith is rightfully on the "50 Smartest People in Hollywood" list (#968) because he's been able to top his musical success with an incredible acting career.
John Perez
Simi Valley, Calif. 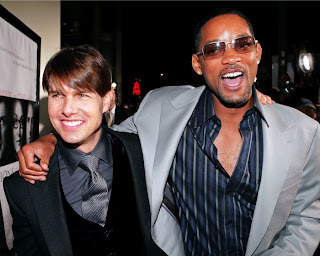 "Anybody know if batshit crazy is contagious?"
J.P.,
Yep, Will Smith is definitely a genius - why, he was able to top the brilliance of "Parents Just Don't Understand" with his subtly nuanced portrayal (of himself) on the Chekovian dissection of modern family dynamics that was The Fresh Prince of Bel-Air. And then to follow that up with his more recent "mature" material, such as "Gettin' Jiggy Wit' It" and Bad Boys II - few artists have the intelligence and depth necessary to pull off such a feat. The Fat Boys almost managed it, but they were never able to find a project that came near the stark beauty of Disorderlies. And let us not even speak of Kid 'n' Play, surely the most Kafkaesque of rappers-turned-actors, doomed to obscurity, their singular vision hopefully acknowledged by some future generation. I wish I could see the rest of the list - I imagine it must include such MENSA candidates as Paris Hilton, for managing to stumble, Forrest Gump-like, into opportunity after opportunity without actually ever doing anything, and R. Kelly, for steadfastly refusing to believe he's the punchline to his own joke - a joke he doesn't even realize he's telling. Maybe even Steve Irwin, for being smart enough to shuffle off this mortal coil before having to witness the utterly embarrassing freakshow that has become his daughter's "career". Damn! If only I could bring myself to read beyond the letters page, I wouldn't have to stay awake nights torturing myself with such hypotheticals. Now if you'll kindly excuse me, I should probably go masturbate before I throw the whole universe out of whack (get it? Me make pun! Ah, fuck it.).

Dirt behind the daydream,
John
Posted by John at 9:11 PM

Please don't think less of me that I like and on occasion still watch 'The Fresh Prince of Bel-Air' but only when I'm really drunk or really lonely, does that make it OK?

Christina,
Come on now, you know me. If I was actually as judgmental in real life as I am in these entries, I'd have been beaten to death long ago. I myself crack up every time Carlton does his dance, but if I just wrote that, nobody would be reading this blog, would they? Go with my blessings.