I had a Raven Symone letter I was going to answer along with this one, but I'm tired, y'all. In fact, this entry's probably kind of shitty because of that, but who cares? It's still better than Dan Brown.

Why do we continue to glorify this woman (Madonna)? She has spent almost her entire career objectifying and demeaning women. She has set a bad example for countless young people who have viewed the world from her skewed perspective. It is not okay to show women in bondage under the guise of entertainment. It is not okay to promote an image of women solely as sexual beings devoid of real human qualities. Now all of a sudden she has children, so she's Madonna of Assisi? Oh, please. She's made her fortune by selling her gender down the river and frankly, that's not okay.
Carol Faubert
Woodstock, Ga. 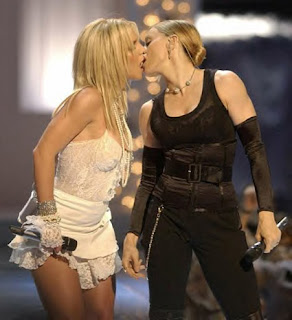 Graduates of the Tom Cruise kissing course
Carol,
I swear to God, I'm beginning to get the impression that everyone who reads People is some crotchety old bag in their late hundreds who can't abide the idea that all the potential gentlemen callers out there want to fuck women whose withered and unappetizing nipples don't get caught in their stockings when they get dressed (and who then go on to blame the women for this fact). Tell me, who should we be glorifying? You? Martha Raye? Believe it or not, Madonna actually recorded these things called "songs" that were then played in discotheques (akin to your "speakeasies") and on the radio, and a certain segment of the population decided they enjoyed them. She also made several moving pictures (the medium that replaced your beloved stereopticon), which no segment of the population decided they enjoyed. Even so, she's sold millions of albums (which is what they used to reproduce sound on after wax cylinders proved inefficient), many of them to teenage girls, who I'm betting weren't moved to purchase said albums simply because Maddy showed some cleavage on the covers. In fact, I doubt many guys bought her albums for that reason either, because by the '80s you could see cleavage about a zillion times a day, due to the fact that women were no longer required to wear petticoats and girdles and overbust corsets and Regency-style dresses. Instead, they just threw on whatever comfortable, loose-fitting crap they had lying around, such as Esprit sweaters, and saved many young boys the expense of those X-ray specs older generations were forced to buy from the back of comic books. Thank you, Gloria Steinem!

But on to your specific points. Maybe you can explain to me how she spent her career objectifying and demeaning women. Did she put up seed money for the Girls Gone Wild franchise? Spend her free time yelling to female pedestrians that they could stand to lose some weight? And what exactly is the "bad example" she set for "countless young people"? That if you're ambitious and become a wildly successful artist, maybe one day you'll become one of the few woman record executives in a male-dominated field? What a stupid bitch. Can't she see how far back she's setting the Women's Movement with these thoughtless acts? She and Oprah (who, I might point out, talks about sex way more than Madonna) ought to be forced to hand in their genitalia and be declared enemies of their gender.

Also, Carol, somebody must have ripped a page out of my Rolodex, because this is the first I've heard that you were the official arbiter of what's "okay". As far as I knew before you straightened me out, it was perfectly fine to show women in bondage for entertainment purposes. In fact, I was under the impression that certain women were allowed to make up their own minds and decide they enjoyed bondage, but I guess I must have been brainwashed by the libruhl mediuh. I'd also like to say that if we didn't look at each other solely as sexual beings every once in a while, none of us would be here. Come on, Carol, haven't you ever let the analytical/self-censoring part of your brain take a break and thought "Man, right now I just totally want to fuck"? I mean, you don't want to get a reputation as a dead lay, do you? So why don't you cut Madonna some slack? She's only trying to ensure the perpetuation of the species. And sadly, dirty, filthy sex is the only method we have of doing so at this point in time. I know, it troubles my soul, too. But who am I to argue with biological destiny? Dirty, filthy sex it must be!

One last thing: What the hell did you mean with your "Madonna of Assisi" line? I assume that was a reference to Saint Francis of Assisi, but if you were looking for saintly allusions to refer to Madonna, why didn't you simply say "the original Madonna"? It took me about 2 friggin' seconds to make the connection, and I'm not nearly the know-it-all you seem to be. It would have fit the situation perfectly, and you could have avoided looking like a dumb-ass (there was no Madonna of Assisi, fool! Hellooo.). Oh, well. I certainly won't be the one to point out your lapse in judgment. I'm all about spreading the love. If you know what I mean (and I'm pretty sure you don't).

She's not a girl who misses much,
John
Posted by John at 5:31 PM

I was reading the first letter and was kind of chuckling softly to myself so I wouldn't wake my mother, who's trying to sleep in the room next to this one and I get to the last line and almost screamed. I was at that exact moment listening to Happiness Is A Warm Gun. I'm sure you barely care, but I thought it might give you a smile. Keep being amazing, it seems to be working for you. -Krista

Holy crap, I thought I recognized this woman's name, and then it came to me (via google):

I think you've got her pegged with the frigid talk.