Sorry for the vacation - I'm working on a book with a friend (who's a bona fide published author, so it's not just some pipe dream like every other creative endeavor I've been involved in) and needed some time to devote to that, but for now I'm back to (hopefully) daily updates. Of course, if we end up getting published, you can kiss my sweet ass goodbye - I'm all for the free exchange of ideas, but I'm even more for the financially compensated exchange of ideas. Say what you will about my leftist ideals, but it's hard to build up a stockpile of Vicodin under Communism.

Shout-outs: After pissing myself laughing at some of the entries in this book, I found that one of my favorite diarists featured in it has her own blog. It actually functions as a pretty good yin to my yang, except it's really more like two versions of the same yin. Whatever. There may be two sides to every story, but one of them is usually full of shit anyway.

On to reader mail! I was all a-twitter when I received another e-mail from one of the People correspondents (from this post). Here it is in its entirety, copied and pasted directly as it came to me, with my bitch-slap response immediately following:

Reguarding a comment to People Magazine about Jacob Hanna

First off, I find it funny how you say we have no life writing a comment into People or any other magazine when you write on this website, and what you say is not even intellectual! Do you want your five minutes of fame, or are you so miserable that you have to pick apart other people? I suggest unless you have anything worth blogging about, something of INTELLECUTUAL interest, then I would save the rest of your brain cells.

Michelle,
Hi! I'm glad you find my blog funny - that's why I write it! Personally, I don't see what's so humorous about me saying you have no life, but that kind of thing's subjective, so I'll file it under "reasonable people can disagree". I'm just happy to have brought you some joy. If any of the People letter writers could use it, it's you.

You're right that what I write "is not even intellectual", and fo' shizzle I'm deeply ashamed of it. Imagine writing a blog about tabloid letters and somehow failing to make it intellectual! Just like everything else I've ever attempted, it should have been a slam-dunk, yet I managed to fuck it up. Damn, I must be D-U-M stupid. Why, if the exploits of Fergie and Celine Dion's degenerate spawn don't lend themselves to discussions of Wittgenstein or Situationist analysis, I'll eat my own farts! Oops - there I go again with my lowest common denominator scatological jokes! Maybe if I cut out all the "fucks" and aimed for wit instead of essentially obvious insults I could be seen as an INTELLECTUAL like Perez Hilton or that site with the photos of the fucking baby animals or all the other really thoughtful blogs out there. I'll tell you what: just for you and your fellow geniuses, here's a joke that's sure to get a chuckle if not an outright guffaw:

So the police pulled over Werner Heisenberg for speeding. One of the officers went up to his car and had him roll down his window and said, "Sir, do you know how fast you were going?"

"Yes," Heisenberg replied, "but I don't know where I am."

Get it? That's gold, Jerry! Gold! Sadly, that's the extent of my non-fart-joke repertoire.

I must also ask, while I've got you here, why you're only allotting me 5 minutes of fame. That's only 33.333% of the fame Andy Warhol guaranteed in his Constitutional amendment. Has our culture accelerated so rapidly that our basic human rights have been abridged to such a degree? And let's face it, if you want to become famous, there's no better path to it than starting a blog. I should be bathing in $55 bills right now, but instead my time in the sun's already passed! If I wasn't so miserable I had to pick apart other people before, I sure am now.

Finally, I do indeed wish I could have something worth blogging about, but as you've now doubt guessed by now, I'm lazy and superficial and must ride the coattails of real writers such as yourself if I'm ever to achieve any kind of sense of self-worth. It's a sorry motherfucking state of affairs, but it beats sitting around drooling into my lap every hour of the day. Unfortunately, at my age it's pretty much impossible to save brain cells, since, as I'm sure a being of your mental stature is aware, those cells are going to die due to apoptosis anyway. Maybe if I'd started this when I was seven things could have been different. Alas, there's no future for me now but to slowly devolve into a shuddering mass of misfiring neurons and massive incontinence. Such is the way of all flesh.

p.s. I realize I'm not an intellectual, but I'm pretty sure there's no "u" in "regarding". Also, when you place a comma after your name, it usually denotes there's something to follow. I do hope you didn't slip out of your chair while trying to finish your e-mail and get a concussion or something.

How do sex talk and man baiting constitute a feminist movement? If that were the case, The Golden Girls paved the way long before the shallow women of Sex and the City trotted through New York.
Jesse Morrison
Memphis

Jesse,
First of all, never bring up The Golden Girls in any discussion of sex. I thought they covered that kind of thing in freshman psychology (or when the good lord handed out common sense). Fact: the elderly are physically repulsive and (mercifully) incapable of any activity more strenuous than opening a bottle of pills with their mottled, arthritic hands or napping in inappropriate locations, so nobody, including them, wants to entertain the notion of anybody over 50 engaging in any form of erotic revelry. To illustrate this (though why this should be necessary is a mystery worthy of Chandler) I'm going to give you an example from my own life: once, when I was a wee lad staying with my grandparents for the weekend, I heard this exchange while passing outside their bedroom door:

Grandma: But don't you like it when I fondle your balls?
Grandpa: You know I do, Hazel. It's just that right now you're fondling my sagging man-bosom.

It all went downhill from there (I stayed outside their room listening for the next hour-and-a-half), in every possible sense. So exercise some judgment and keep Rue McClanahan out of these matters. And all other matters, while you're at it. She was always such a bitch to poor, sweet Rose.

Secondly, if feminists want to talk about sex and bait men, who are you to question them? If it wasn't for such brave feminists, I probably wouldn't have been able to feel up half the chicks I did in my teens. If Sex and The City has taught us one thing, it's that being a modern woman means being able to be just as big a douchebag as any frat-boy, and you can take away that freedom when you pry it from my cold, dead hand. If you know what I mean.

Said there's no returning from this chartered trip away,
John 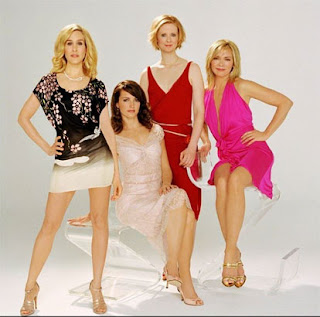 David,
I can't tell you how happy I am to see that you live in West Hollywood, because I always find it supremely satisfying when all the requirements for a stereotype are fulfilled. Now then: I'm willing to compromise on your point: The writers for SATC were "great" when compared to the writers for Lipstick Jungle and Cashmere Mafia. But then, I'm a great writer compared to those people - and for that matter, so are you. Kinda puts things in perspective, doesn't it? I guess what I'm saying is: You really watch a lot of shitty television.

I love you from the bottom of my pencil case,
John
Posted by John at 10:35 PM

In defense of Michelle, maybe by "reguarding" she was creating her own word. And by which, re-guarding actually means to put a protective wall back up around her comment to spiritually "block" it from your harsh analysis and cruel attack on her letter. But now I think I'm intellectualizing the whole thing too much--something you wouldn't get anyway, John.

ooh, and I forgot to point out--don't forget the soeurs, too. (you only wrote this entry to your freres.)

"I love you from the bottom of my pencil case"
You used 'Beautiful South' lyrics to address these dimwit letter-writers? That's on a par with inappropriate touching of the mentally handicapped. So wrong!
love the blog though.