It's about time someone reached out to Britney. Kudos to Mel Gibson and wife Robyn for stepping up and helping this troubled young woman find her way back. This relationship is a healthy starting point for someone who once captured so many hearts. Britney Spears will be back, thanks to people like the Gibsons.
Stacie Mollman
Park Falls, Wis. 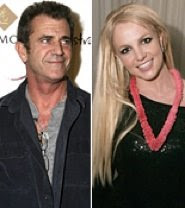 Now that she's grown her hair back, she no longer reminds me of
those evil concentration camp prisoners!
Stacie,
Indeed, because if there's one name that instantly springs to mind when most people think "mental stability", it's Mel Gibson. And though "Mel and Britney" was the least successful Ben & Jerry's flavor ever test-marketed (plain vanilla with cubes of frozen tequila and chunks of caramel-covered shame), I'm sure Gibson's Close Personal Friend Jesus Christ will see to it that Mel and Britney the motivational speakers will get their message across to a suitably impressive mass audience once this inspirational story plays out to its inevitable happy conclusion. Because nothing sells tabloids like respectable sobriety. Now if only we could get Danny Bonaduce to become Amy Winehouse's sponsor, every single major problem on Earth would be solved, and we'd finally be able to usher in that Age of Aquarius those stupid fucking hippies were always warbling about.

There's a cat in my alleyway dreaming of birds that are blue,
John
Posted by John at 10:53 PM